‘Well my first memories are living in Tailem Bend.  I’m sure I thought these people, who were my foster parents, were my parents, just I didn’t understand. I know that I was there with my sister who is two years older and my only sibling. What I do remember that my foster father used to do sexual acts with me from when I was 3 until I was 7 years old. I didn’t realise that it been going on for years until I got my Ward of the State files. I remember the foster mother used to take me into the bathroom and would  push a full cake of soap into my little mouth to wash it out and try to stop me from saying ‘disgusting language’. As I wasn’t even at school, I now presume that this is the language that the foster father was using when he was sexually abusing me. I  now know through the files that she knew what he was doing and I obviously knew it was wrong, because I was telling her and she wasn’t doing anything about it. So, I now know where the language came from. It’s the things he was saying to me, and she had to shut me up so that people didn’t know. I was removed from them and lived in so many foster home over the years. Some for only a few days, others for months. So when I get the redress money, which might take years for me because of my health, what I’m going to do then is, I’m going to go through the hundreds of pages of files that I have. Anything that I don’t enjoy reading, that doesn’t give me pleasure, that’s not positive, I am going to have a celebration and burn those papers and that’s it. It’s gone from my life.’

‘Priscilla’s mother wrote many pleading letters to the Children’s Welfare Board, asking for her daughters to be returned to her care. Every request was refused. Priscilla and her sister were sometimes forced to watch their mother walk away crying from the institution when she would come and visit them. The institution, on occasion, would allow them to meet at the institution and only with an approved signed permission form.  The sisters were told their mother didn’t want them, but Priscilla’s files revealed a very different story. Even the courts denied them. The letters that she wrote to her daughters were returned unopened by the institution that held her children. These letters were found in a box under her bed when she passed away. Sadly, she died of a heart attack at 50 years old and without ever meeting her daughters as adults. Priscilla believes her mother died of a broken heart. This artwork contains just some of her letters printed onto lace edged handkerchiefs, to symbolise the tears they all cried.’

‘Priscilla Taylor is one of the most courageous, admirable and generous women I know. Priscilla had a rough start in life, but she has an inner core of goodness that doesn’t seem to have been ill-affected by the horrors visited on her – the permanent separation from her mother, the back-and-forwards 60x between children’s home and foster care, the abuse in foster care, the shame of poverty and the trauma of having her first child forcibly removed. That doesn’t mean that Priscilla hasn’t struggled in her life, I know she has. But along with the struggle has been a pouring forth of goodness.

For 35 years Priscilla has been an activist on behalf of Forgotten Australians. She was a key part of a campaign calling on the South Australian Government to convene an inquiry into the sexual abuse of children in state care, the campaign resulting in the Children in State Care Commission of Inquiry which ran from 2004 to 2008. When the State Government committed to an apology, Priscilla was a member of the survivors’ group consulted for the wording of the apology delivered on 17 June 2008 and has been an organiser for 10 anniversary events following the apology. Priscilla has also given evidence at two national inquiries. The first was the 2004 – 2008 Senate Inquiry which became the Forgotten Australians: A report on Australians who experienced institutional or out-of-home care as children. Priscilla was in attendance at the 2009 Apology given by then Prime Minister, Kevin Rudd and has been an organiser for anniversary events in the 9 years since that apology. Because she was still a state ward and had been forced to give up her first son, Priscilla gave evidence to the federal government inquiry into forced adoptions and attended the National Apology given by then Prime Minister, Julia Gillard, on 21stMarch 2013.

Priscilla has been keen to participate in university-based research as well as working with community members. In 2011 Priscilla co-edited a collection of stories by people who’d been in the care of the state, Recipes for Survival: Stories of Hope & Healing by Survivors of the State ‘Care’ System in Australia. She was a state member of the Consumer Research Group for the Find & Connect Project, and promoted a national study into the long-term outcomes of Forgotten Australians in 2015. In recent years Priscilla has become an advocate for Forgotten Australians who may again be faced with institutionalisation as they age. Priscilla has made contact and spoken with a number of aged care facilities in South Australia to put forward a case that the plight of Forgotten Australians in childhood needs to be considered when providing care and accommodation for them in their twilight years. A member of CLAN(Care Leavers Australasia Network) for 14 years, Priscilla has organised social events for South Australian members for the last 5 years. She was an active member of Elm Place’s reference group for 14 years and an organiser when New York-based artist, Rachel Romero’s exhibition, Enslaved in a Magdalene laundry, was convened at the University of South Australia’s Hawke Building in September 2014.

Over a 15 year period, I have witnessed Priscilla speak to a range of people – government ministers, media personnel, public servants, lawyers, and fellow Forgotten Australians – with grace, intelligence, warmth, and wit. She is a wonderful woman, a woman who has been able to take her past pain and turn it into something good. Her persistent and consistent work on behalf of Forgotten Australians and in support of them, and her desire that current children in out of home care receive far better care than children in the past, is inspirational. Let’s hope that the 21st-century child protection system listens to and learns from Priscilla.’

Co-author https://theconversation.com/why-children-in-institutional-care-may-be-worse-off-now-than-they-were-in-the-19th-century-104395 & The Slow Evolution of Foster Care in Australia. Just Like a Family? 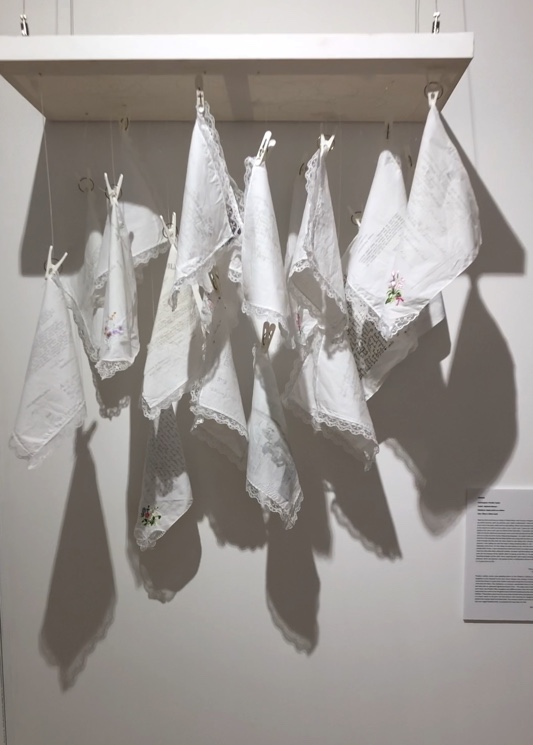